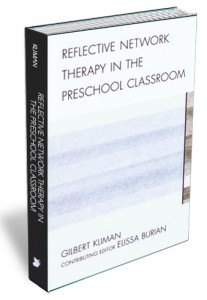 Reflective Network Therapy describes a remarkably effective school-based treatment method that harnesses small social networks for the good of seriously emotionally disturbed preschoolers or those with autism spectrum disorders. The book provides an in-depth explanation of the method – including the work of parents, peers, teachers, and mental health therapists. The RNT method has been used in many real life environments and is well-tested for feasibility, replicability, I.Q. effects, and children’s global mental health results. The cost-benefits and human benefits are extraordinary.

Amazon Book Reviews for Psychotherapy in the Preschool Classroom

“The book is not only for psychoanalysts who want to move our thinking into the frontiers of children’s lives. But, it is also a book that should be read by those making policy, by those in education and very much by parents who are desperate for a humane approach to helping their severely disordered preschool children.”
– Nathan Szajnberg, PhD

A breakthrough in early childhood treatment for very disturbed preschoolers

By Arthur Reiss MD on February 29, 2012
This is a unique approach. The use of therapy in a school classroom setting which includes the participation of peers, teachers and parents in various combinations is something I have not seen in the literature with this much focus and justification by scientific data. Dr. Kliman and his colleagues are willing to think outside of the box in devising a method backed up by results. His book includes follow-up studies of individuals and groups who have been treated early in their lives with Reflective Network Therapy, as well as of control and comparison groups. The results are so remarkable that serious efforts at replication are in order. All early childhood educators and child therapists, as well as parents of disturbed or autistic preschoolers would do well to read this extraordinary book.

An ambitious and optimistic approach to treating children with ASD

By Melissa J. King Nuttall on May 5, 2012
Dr Gilbert Kliman’s book on Reflective Network Therapy (RNT) is an important addition to the literature written about early intervention for children with serious emotional disorders or autism spectrum disorders. He thoughtfully and clearly describes the method which was developed over the span of his 45 years of intensive work treating the most difficult children. As a parent of a child with autism, I was impressed that this interpersonal method had an evidence base. While my son is well past the preschool age and I am very familiar with other treatment models, this book gave me a much deeper understanding of my son’s difficulties and the importance of “social rather than solitary learning” and how his high level of anxiety is often the “cause of his hypervigilance against the adults who care for and teach him.” Dr Kliman has applied his experience and expertise to early intervention in a way that adds “an important dimension of improvement to the therapies currently available.”

Helping children in the classroom

By N. Szajnberg on October 8, 2012
This book has credibility and very important information for parents of disordered or autistic preschoolers, and school systems burdened by more expensive and less evidence-based methods. Forty-five years of work and data about hundreds of children is trundled into 376 pages. In Reflective Network Therapy a therapist works within a classroom setting, conducting sessions during the class and in the class (often getting ‘input’ from other children); meeting with the teacher before and afterwards; and meeting with parents. This is working the front lines. I review this work at an advantage over most readers, as I have visited this preschool setting, watched Gil Kliman work with the children, the teachers and meet with the parents. Yet, much of the work will seem familiar to analysts: the intense, yet evenly-hovering presence with the child, even amidst the sometimes disorganizing chaos of a special education classroom of children. There appears to be a halo of concentrated attention, even as the analyst lies on the floor, facing a withdrawn child under a table or in a corner, or one banging the oversized Lego blocks. It is a portrait both dedicated and humbling.

The first section covers the components and history of Reflective Network Therapy (RNT): in-classroom individual treatment, several times weekly; close collaboration with teachers weekly consultation with the parents. Begun in the 1960’s with Marianne Kris’s supervision at the New York Psychoanalytic Institute, the technique was studied with support from the Foundation for Research in Preventive Psychiatry (including Solnit, Neubauer and others). Kliman’s aim from the beginning was to assess the impact of this approach across diagnoses, including its cost and document its benefits. This is unusual for a psychoanalytic enterprise. He documents a series of studies including comparison and control groups and outcome measures. Among other findings, several studies have shown an increase in I.Q. averaging 24 points. And the improvements (in IQ and other emotional measures) are dose-related: children seen four times weekly benefit more than those seen twice weekly. Next, in addition to case histories, we have a first-person account of a formerly autistic child writing four decades after her first three-year-old meeting with Dr. Kliman. This woman’s articulate account of how she “thought” in pictures (and still does) takes its place with Temple Grandin’s moving narratives of her accommodations to her autism or the law professor, Evelyn Saks’ account of her schizophrenia and how intensive psychoanalytic psychotherapy has kept her emotionally alive. We need more such accounts from the former patients. Books such as August (allegedly fiction), or The Words to Say It, or the Pelican and After should become core texts for those of us in the field and more so for the public. These books are descendants of the medieval Malleus Maleficarum; intended as a guide for the courts on how witchcraft and witches exist, it is for us today a guide to how schizophrenic-like thinking was recorded — and criminalized — in that time. Kliman recounts how this technique seems beneficial for a range of diagnoses, which while varied in DSM terms, share qualities such as disordered thinking, profound anxiety, poor self representations and disruptive behaviors. He compares the cost and outcome of the RNT approach to many others such as Lovaas’s behavioral approach (with a 40% success rate in improving IQ) or intensive individual therapy with children pulled-out of the classroom. Fonagy and Target’s honest and forthright account of the analyses of children at Hempsted showed whom psychoanalytic treatment helped and whom it didn’t (such as these kinds of children). This book takes us into the classroom with some of the most damaged children we have in our society. The book is not only for psychoanalysts who want to move our thinking into the frontiers of children’s lives. But, it is also a book that should be read by those making policy, by those in education and very much by parents who are desperate for a humane approach to helping their severely disordered preschool children.